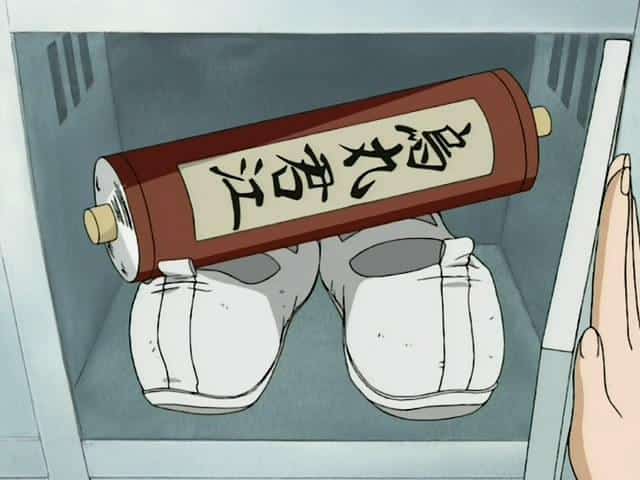 Anime, the term describing all the cartoons and comics originated from the Far East country of Japan, has become quite popular across the world. The amount of fans of this genre has grown to a big number and it shows no sign of slowing down. If you are one of them, you must be facing a hard question of how to show off your love, some of you might come up with the awesome idea of showing it through your sneakers, but it is quite hard to find a good pair. “Should I choose the Naruto ones? Or should I choose the Bleach ones? How about these One Piece ones?”, if you are having these thoughts, don’t worry, we know all about that pain, so we did all the hard works for you and have put together a list of the best Top 10 Japanese Anime Converse Inspired Sneakers in 2023. 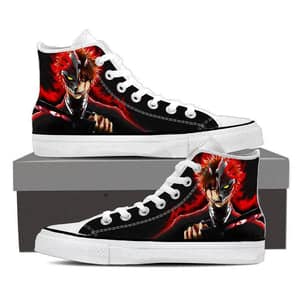 Even though its hype died down after the Aizenarc, Bleach was still one of the 3 most popular manga and anime series besides One Piece and Naruto, as its influence simply knows no bound and its fandom number is simply humongous. So, if you are a part of this magnificent series, I am quite sure that you will love these Bleach Ichigo Hollow Mask Converse shoes, as they are not just simply shoes, they are graffiti shoes with unique artwork that will surely showcase your personality. They are made out of canvas with a special sublimation technique so you will not have to worry about their durability. 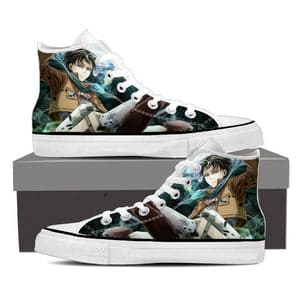 Are you an avid Attack On Titan fan? Do you watch the series regularly? If the answer is yes, there is no doubt that you should know who the Captain is. Levi Ackerman is the squad captain of the Special Operations Squad of the Survey Corps, he is widely regarded as the strongest soldier of humanity. Outside of his incredible combat prowess, he is also known as a clean freak by virtually anyone who knows him personally, and he has a quite strong sense of morality and empathy that is rarely shown. All of these points have helped him to gain a tremendous amount of fans, eclipsing even the series’ main characters. So if you are a fan of his, don’t hesitate and buy these Levi Ackerman The Captain Full Print shoes. 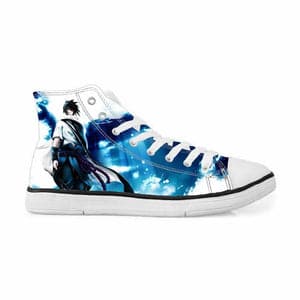 Naruto, the single most popular anime series in its prime, has ended and we all were presented a new chapter in the Naruto Saga with the launch of Boruto, but sometimes we just want to have something to remember about the saga of the legendary team 7, and these Sasuke Uchiha Sneakers Converse shoes can do the job just fine, and especially if you are a Sasuke Uchiha fan, then these shoes are simply a godsend. 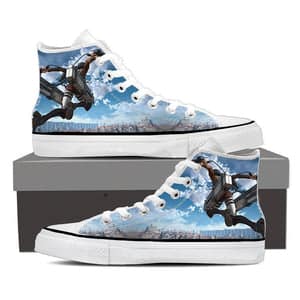 Another Attack on Titan product on this list, and they are not just any Attack on Titan shoes, their design is again focused on Levi, another testament to his insane popularity and his fandom’s strength. These Attack on Titan Captain Levi High Jumping shoes are just like what their name implied, rocking a beautiful picture of Levi jumping high and with a beautiful color scheme, you can both showcase your love for the characters and the series and get a beautiful pair of shoes at the same time. 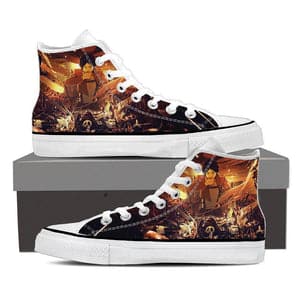 The third Attack on Titan-inspired product on the list, these shoes are made out of canvas with a special sublimation technique that makes them quite durable. They have a beautiful picture of Eren changing that you will not regret adding to your collection. 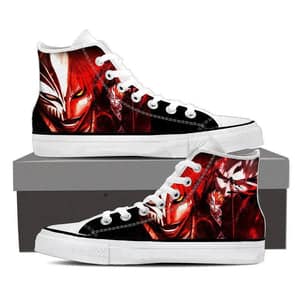 Being the second Bleach-related product on this list, these Bleach Ichigo Hollow Mask Converse shoes can hold their own against all of the other products. Made completely from canvas with a special sublimation technique, they rock a beautiful picture of Ichigo with his Hollow mask. Coupled with the genius use of an intimidating color scheme and you have not just a beautiful Bleach collection but also a practical and durable pair of shoes. 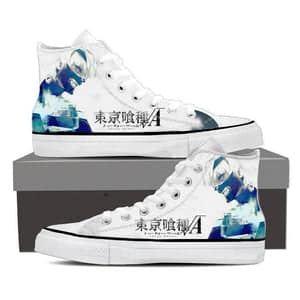 Tokyo Ghoul has managed to completely capture the hearts of many anime lovers around the world since its debut in 2014. If you are an avid fan of this incredible series, there is a high chance that you are also a fan of its charismatic protagonist, Ken Kaneki. He is simply the most grown character in the series, so there is quite a big fandom built around him. Why don’t you show off your love for him with these Tokyo Ghoul Ken Kaneki Badass Converse shoes? 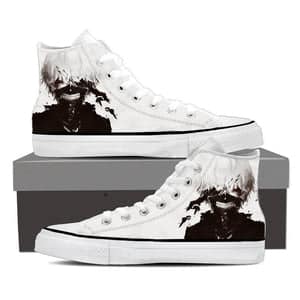 Hey Tokyo Ghoul fans, and especially Ken Kaneki fans, we are not done yet. We have prepared for you another gift: a pair of Tokyo Ghoul Ken Kaneki Black and White Converse shoes, let’s check them out and show off your love for the charismatic and empathetic main character. 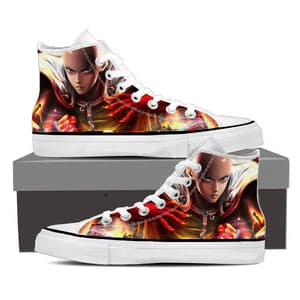 One-punch Man Saitama, the main protagonist of the anime that has the same name, is one of the currently most popular fictional characters thanks to his nonchalant attitude and his immeasurable fighting prowess, so there is no doubt that he would have so many fans. If you are one of them, why don’t you show off your love for him to the whole world with these Saitama Ready to Fight shoes? 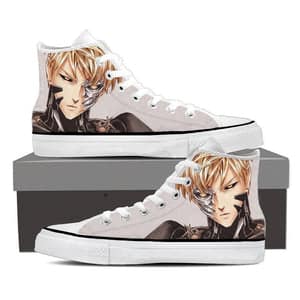 If you are a fan of One-punch Man, there is no way that you don’t know of the single most popular character of the series whose popularity is only behind the main characters. Yes, we are talking about Genos, the Cyborg, with his handsome face and unique character, he has managed to gather quite a big fandom. Thus, if you are one of them, why don’t you show your love for him with one pair of Genos the Demon Cyborg 3D print shoes?